The differences between karma, jñāna, and other pursuits

The differences between karma, jñāna, and other pursuits

I received your letter dated the 7th of Vaiśākha and became acquainted with the news about you. By the mercy of Śrīmān Mahāprabhu, we are fine. Still, owing to the results of past activities, various obstacles are appearing on the path of service to Śrī Hari.

If one stops committing offenses and truly desires to accept the holy name of Śrī Hari, then by chanting constantly, one’s offenses will dissipate. Śrīmān Mahāprabhu entrusted all of His potency to Śrīla Rūpa Gosvāmī. You must beg from the core of your heart at the lotus feet of that Śrīla Rūpa Prabhu and all of the Śrī Rupānuga Prabhus, his followers, to receive the kṛpā-śakti, or potency of grace, which Mahāprabhu infused in him. More importantly, you must pray wholeheartedly to Śrī Harināma Prabhu for the qualification to serve Him. Nāma Prabhu, the Lord as His name, will become Nāmī Prabhu, the Lord Himself, and reside in your heart. 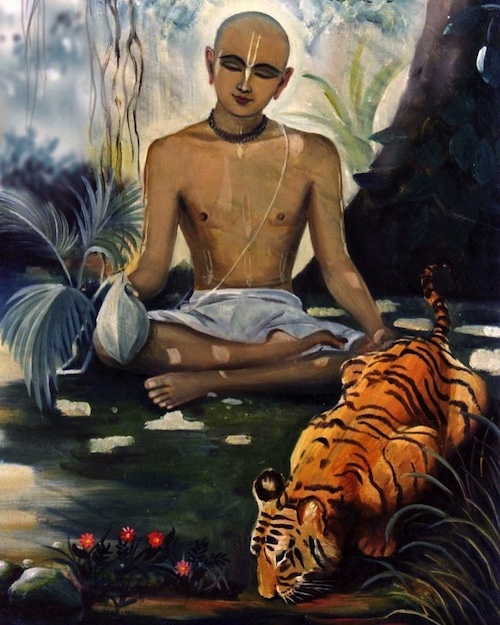 The desire to attain anything other than Śrī Kṛṣṇa is called anyābhilāṣa. All of the living entities who harbor desires for something other than Śrī Kṛṣṇa are known as anyābhilāṣī. A person inclined to engage in pious activities is called a karmī. A person pursuing impersonal knowledge is called an īśvarābhinna-jñānī, a pseudo-intellectual who thinks himself to be identical to the Supreme Lord. The difference between a karmī and an anyābhilāṣī is that the anyābhilāṣī engages in prohibited activities. The difference between a jñānī and an anyābhilāṣī is that the anyābhilāṣī is possessed of a flawed concept of a reality, a notion of separateness from the Lord, denying any connection with Him.

When a person who intends to serve Kṛṣṇa is freed of his attachment to his personal enjoyment and accepts the objects of the senses in order to serve Kṛṣṇa in a mood of transcendence, it is called yukta-vairāgya, or holistic renunciation. When one considers scripture, the deity, the chanting of the holy name and Vaiṣṇavas to be material phenomenon, the result is an inferior sort of renunciation, which must be rejected by a devotee. The devotees of the Supreme Lord shall only accept yukta-vairāgya. “Krame krame pāya loka bhava-sindhu-kula – Gradually, in due course of time, you will be able to reach the shore of this ocean of material existence.” You should try to understand this instruction of Śrīmān Mahāprabhu properly.

Translated from Prabhupādera Patrāvalī
by the Rays of The Harmonist Team