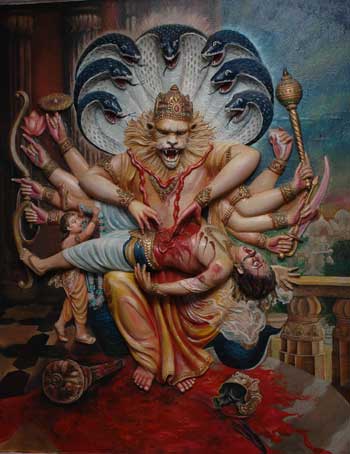 [The following passages from “Four Vaiṣṇava Ācāryas and Gauḍīya Darśana”, published by Śrī Śrīmad Bhaktivedānta Nārāyaṇa Gosvāmī Mahārāja, illuminate, through the interaction between Prahlāda and Hiraṇyakaśipu, the potency of pure preaching and the resistance to it by those who are inimical to the Supreme Personality of Godhead. – The Editors]

The Vaiṣṇava ācāryas are not fearful of preaching the Truth even at the cost of their own life, nor, by staying exclusively submerged in the bliss of their own bhajana, do they remain indifferent to the eternal welfare of any soul, even one who is averse to Śrī Kṛṣṇa. Rather, they follow the footsteps of Śrī Gaurasundara, who descended to spread and teach us the substance of His own bhajana. Hence, the Vaiṣṇava ācāryas display their activities to the inhabitants of this world just to bring about their eternal benefit, interacting with them in a natural way. But seeing this, ordinary, antagonistic people, who have envious and critical vision, perceive Vaiṣṇava ācāryas in a degraded way.

When the society comprised of the antagonists of Śrī Viṣṇu commit atrocities against each and every preacher of the Truth, ordinary people see or hear about such atrocities.

There is a deep reason for using the term ‘ordinary people’ in this context. Rāvaṇa set out to steal svarūpa-śakti Sītā, but in fact he could not even touch her. The person ordinary people saw him steal was in reality Māyā Sītā. In the same manner, it is not even possible for Viṣṇu and the Vaiṣṇavas, who are beyond the material creation, to be touched by the envious atrocities of worldly people.

The child Prahlāda was the son of the demon king, Hiraṇyakaśipu. Although he was actually a Viṣṇu bhakta, as long as he had not started preaching about the Absolute Truth, he remained the apple of his father’s eye, and the beloved prince of the whole demon society. As the necklace that adorned their necks and the treasure that graced their hearts, he was the object of everyone’s respect, care, affection, parental love, praise and admiration.

Yet, from the day Prahlāda opened his mouth in front of the king of demons and began preaching about the Absolute Truth, more and more people became his enemy. He had begun preaching about one-pointed devotion to Viṣṇu; about how essential it is to perform hari-bhajana by renouncing one’s ties to household life; about the fallacy of kula-gurus*, who are completely infatuated with their families; and about the importance of serving the paramahaṁsa clan (the topmost swan-like devotees). And he had begun preaching to the young sons of the demons, his peers in school, about the absolute necessity of performing hari-bhajana after rejecting the association of their demon families, who had all accepted the vows of household life. From that time on, more and more demons turned against him.

_____________
* So-called gurus who maintain their disciplic succession solely through heredity.

In the jīva’s conditioned state, he is enamoured by the very deep illusory relationship that exists between father and son. Under the spell of that illusory relationship, a father sees his ugly, drab son as beautiful as pure shining gold, he thinks his blind son has lotus eyes, and he considers even the most disgraceful son to be the ornament of the entire dynasty. Thus, in the deluded vision of the father, a son’s thousand faults are seen as a thousand good qualities. Yet as soon as Prahlāda started preaching about the Absolute Truth, even his beloved father, Hiraṇyakaśipu, what to speak of others, considered this simple act such a great fault that he made thousands of attempts to murder his own son, he who had been more dear to him than his own soul.

In the history of this world, can we find any example where, out of extreme selfishness, a father has tried to kill his small son, a son more dear to him than his own life, a son who had not yet learned to disrespect his father in any way, either because of the temptation of a woman or because of greed for the throne, like the Muslim king Aurangzeb? Would any father throw such a tender five year old boy under the feet of a frenzied elephant hoping to see him crushed and killed; or feed him poison, throw him from the top of a cliff, or even attempt to burn him alive in a blazing fire?

Prahlāda’s only ‘fault’ was that he began preaching about the Absolute Truth. If, in preaching the Truth, even a father can become the enemy of his own son, is there anything surprising if those who are adverse to the Absolute Truth and prone to selfishness deem the expounders of Reality their enemies? Thus it is seen that even in Satya-yuga, when all four legs of religion were intact, a father did not hesitate to commit such atrocities against his own son, regarding him as an enemy, simply because he was a preacher of the Absolute Truth.

Even the heart of a father, which was filled with innate paternal affection, could become cruel towards the son who was a preacher of Truth! How blessed is the power of animosity to Viṣṇu! It makes the impossible possible by turning the innate parental affection a loving father feels for his own son into severe cruelty and animosity, simply for speaking the Absolute Truth.

From the tips of their toenails to the tops of their scalps, the living entities in the material world are so averse to Śrī Viṣṇu that they absolutely refuse to hear the Truth – that is, about the transcendental features of the Supreme Personality of Godhead, Śrī Kṛṣṇa. They avoid the Truth as if they had made a solemn vow of aversion to Kṛṣṇa, or as if it were the irrevocable dictate of their true nature.

Whenever the Vaiṣṇava ācāryas begin preaching the Truth, inimical people, who are in the majority in this world, vow to destroy themselves by battling the propagation of Truth. But the ācāryas feel so much distress upon seeing the suffering of others that, despite all opposition, these great personalities unceasingly and increasingly distribute their amandodaya-daya.

Excerpt from “The Unparalleled Speciality of the Vaiṣṇava Ācāryas (part one)”
CC-BY-SA Rays of The Harmonist – “Kṛṣṇa is Only Hungry for Love", Issue 22 (Kartika 2010)

Rays of The Harmonist On-line, Year-6, Special Online-Edition,  “Preach the Truth Without Fear of Death”by disciples of Śrīla Bhaktisiddhānta Sarasvatī Ṭhākura Prabhupāda, is licensed under a Creative Commons Attribution-Share Alike 3.0 Unported License to ensure that it is always freely available. You may redistribute this article if you include this license and attribute it to Rays of The Harmonist. Please ask for permission before using the Rays of The Harmonist banner-logo.