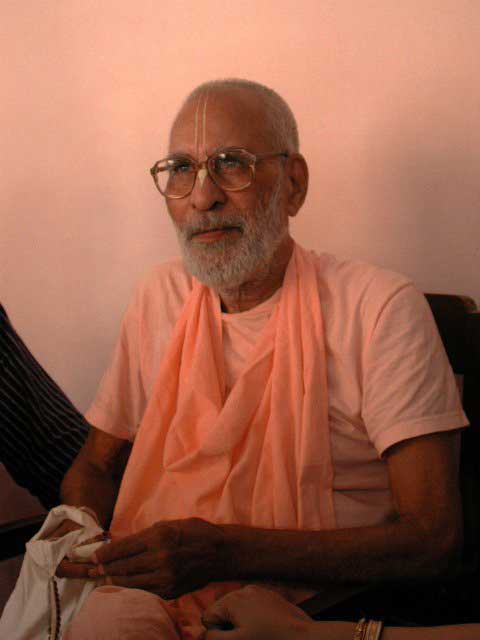 The methodology of conducting śrī vyāsa-pūjā

The great festival of śrī vyāsa-pūjā, or śrī guru-pūjā, commemorating the appearance day of nitya-līlā-praviṣṭa oṁ viṣṇupāda Śrī Śrīmad Bhaktisiddhānta Sarasvatī Gosvāmī Prabhupāda, crown jewel among the clan of swan-like, saintly personalities (paramhaṁsa-cūḍāmaṇi) and the spiritual master of the whole world, has been ceremoniously concluded in all the branches of Śrī Gauḍīya Vedānta Samiti. The festival was celebrated under the guidance of Śrī Gauḍīya Vedānta Samiti’s founder, gauḍīya-vedāntācārya oṁ viṣṇupāda Śrīla Bhakti Prajñāna Keśava Gosvāmī Mahārāja, who in present times is the guardian of that supremely pure lineage comprising the followers of Śrī Rūpa Gosvāmī and who fulfils the cherished desires of Śrīla Jagannātha dāsa Bābājī Mahārāja, Śrīla Bhaktivinoda Ṭhākura, Śrīla Gaura-kiśora dāsa Bābājī Mahārāja and Śrīla Sarasvatī Ṭhākura Prabhupāda.

The śrī vyāsa-pūjā conducted by Śrī Gauḍīya Vedānta Samiti has a distinctive speciality: it observes the very same methodology as that adopted by Śrī Nityānanda Prabhu in His worship of Śrī Caitanya Mahāprabhu in the house of Śrīvāsa Paṇḍita [known as vyāsa-pañcaka]. Jagad-guru Śrīla Bhaktisiddhānta Sarasvatī Prabhupāda himself extracted, with great difficulty, this same methodology [vyāsa-pañcaka] from the Govardhana Maṭha of the Śaṅkara sampradāya in Purī. It was then corrected and expanded by the seventh Gosvāmī, Śrīla Bhaktivinoda Ṭhākura. This method of worship was published when Śrīla Bhaktisiddhānta Sarasvatī Gosvāmī was still present in this world, but practice of it did not become prevalent. After the departure of Śrīla Prabhupāda, however, his most beloved oṁ viṣṇupāda Śrī Śrīmad Bhakti Prajñāna Keśava Gosvāmī Mahārāja, by firmly inaugurating and propagating this practice, fulfilled the heartfelt desire of Śrīla Prabhupāda and thus established the topmost ideal of śrī guru-sevā. This activity is more valuable and significant than constructing a large temple for Śrīla Prabhupāda. Śrīla Prabhupāda, in his own words, has confirmed this: “We have not come into this world to become craftsmen of wood and stone. We are exclusively peons of the message of Śrī Caitanyadeva.” Therefore, the epitome of guru-sevā is to fulfil śrī guru’s heartfelt desire to preach his message throughout the whole world.

The word vyāsa means “to expand”. In other words, the person who compiled, divided and edited the Vedas, who authored the most valuable scriptures, like eighteen Purāṇas, the fifth Veda – Mahabhārata, Vedānta-darśana [Vedānta-sūtra] and Śrīmad-Bhāgavatam, who himself travelled throughout the world, illuminating it with the light of knowledge realized in his samādhi, thus expanding ubiquitously the name, form, qualities and pastimes of the Śrī Bhagavān, is renowned, as per Indian expression, as Śrī Kṛṣṇa Dvaipāyana Vedavyāsa.

Śrī Kṛṣṇa Dvaipāyana Vedavyāsa is not an ordinary poet or author, nor is he just a karmī (fruitive worker), or a jñānī (seeker of monistic knowledge). Nor is he a bhakta (devotee). He is a śaktyāveśa-avatāra (an empowered manifestation of the Supreme Lord), and he descended to this world out of his own accord, his heart melted with compassion upon seeing the destitute state of the conditioned souls. He has manifested so many scriptures for the benefit of mankind that it is not possible for one person to complete reading all of them in one lifetime. There is no subject in this material world that cannot be found in the literature manifested by Śrī Vedavyāsa – codes of religion, codes of politics, codes of society, poetry, grammar, metre [in singing], astrology, philosophy, science and so forth.

Solely on the strength of the words of Śrī Vedavyāsa, India can lead the entire world

Śrīmad-Bhāgavatam and Śrī Gītā are respected by every community in the world, whether its peoples are educated or uneducated, rich or poor. The human heart, terrified and agitated by a destructive society, is in search of fearlessness and peace. Only the eternal and transcendental message of Śrīmad-Bhāgavatam and Śrī Gītā can give these two necessities of the human race. These two scriptures contain the most astonishing solutions to all the problems of each and every soul residing anywhere in the world, for all yugas. Ancient India lead the entire world for a long time solely on the strength of the words of Śrī Vyāsadeva.

Although India today has virtually lost all its ancient external glory, thus lagging behind other countries in all areas – economic, societal, political and scientific – nonetheless, on the strength of its ancient culture and principles, the ethics and values of which Śrī Vyāsadeva is the very foundation [having put them in writing], India is still holding its head high in the world. If Śrī Vyāsadeva is separated from Indian culture, from Indian ideology and from Indian philosophy, then India becomes devoid of any essence, like a temple without a deity or a body without a soul.

Nowadays, all the nations of the world are fully occupied in implementing plans to manufacture and develop. Why should India be left behind? While on one hand, agriculture, commerce, handicrafts, and various industries are being developed, on the other hand, the evils of bribery, fraud, theft, robbery, exploitation, corruption and the threats and fear of murder and war cause the human heart much pain and agitation. Though external and material progress is visible, spiritual and moral values are rapidly deteriorating day by day.

While on one side, there is an uproar for world peace, non-violence and the principles of Panchsheel (a peace treaty between India and China), at the same time, cows, which are the emblem of Indian culture, other animals, and countless humans on the stage of political wars, are being massacred. In our opinion, the so called educated and advanced society of today is proving itself to be far more destructive and ruthless than the illiterate and barbaric forest tribes of any millennium.

India, too, is engaged in this external development with all its capacity. New schools and colleges are being opened, new dams are being constructed, new industries are being established, new roads are being built and new research laboratories are being founded, but in spite of all this, hardly any positive fruit is visible. There is still a scarcity of food and proper education, and malpractices and immorality are rampant. Corruption is everywhere.

What is the reason for all this? If we deliberate on this sincerely, we will realize that although we are giving importance to external and material development, due to thinking such external advancement to be the source of all peace and happiness, we are completely neglecting internal, or spiritual, development and disregarding ancient Indian culture – its values and principles. We should not forget that Śrī Vedavyāsa alone is the foundation of Indian culture and spiritualism. The construction of a new India devoid of this internal, or spiritual, development is like a marriage party without the groom. Therefore, unless India learns to pay respect to the teachings of Śrī Vyāsadeva and offer him worship, for it to hope for true advancement or real welfare is like expecting fruit from a dried up tree.

Eternal peace and happiness is possible only by worshipping Śrī Vyāsadeva, which means following his teachings

It is evident that India’s materialistic outlook on development is absolutely external and incomplete. The question worth contemplating now is this: What is the true welfare or real goal and by what means is it to be achieved? Śrī Vedvyāsa has said that none of the following achievements, such as the post of Brahmā, the kingdom of heaven, the emperorship of this world, the kingdom of lowly planets, attaining suprahuman yoga perfections or even attaining liberation, is the topmost goal and worth achieving:

"Those who have surrendered their hearts to Me do not desire the positions of Brahmā or Indra, sovereignty over the whole Earth, the kingdom of the lower planets, mystic perfections such as aṇimā, or even the state of liberation. They desire nothing but Me. "

Instead, Śrī Vedavyāsa considers that service to Śrī Kṛṣṇa or attaining kṛṣṇa-prema is the topmost goal for all living souls. It is his teaching that the soul is a conscious being. The eternal constitutional position (svarūpa) of a living being is that of a servant of Bhagavān. This alone is his true nature and is called the dharma of an entity. The root cause of entanglement in this world and the root cause of all the material miseries is solely the wrong application of this constitutional nature, or dharma. All birds and animals, plants, creepers, grass etc. are our kinsmen. It is our duty to liberate them from the clutches of māyā.

This alone is the source of peace and eternal happiness. Modern society wishes to attain peace and happiness through worldly means and material advancement, but if we glance through the history of bygone yugas, we realize that material affluence is never the source of true welfare. In fact, in most cases, material affluence becomes an impediment on the path to true welfare. India will therefore have to turn to the teachings of Śrī Vyāsadeva.

Unless the wisdom to distinguish spirit from non-spirit awakens, unless one gains knowledge about what is conscious and what is not, and unless one does not relinquish all dharma related to one’s body and mind and engage in exclusive service to Śrī Bhagavān, the topmost welfare cannot be attained. As instructed by Śrī Vyāsadeva, the means to attain this topmost welfare is harināma-saṅkīrtana. In his scriptures, he has repeated this fact multiple times.

Therefore, if we are to become truly exalted, our first and foremost duty is to learn to worship Śrī Vyāsadeva. He is the life air (prāṇa) of Indian culture and civilization. Not only India but the whole world is eternally indebted to him and shall remain so forever. Therefore, our foremost duty is to accept our indebtedness to him and worship him. To worship him means to realize the greatness of his teachings and practise them in our own life, thereby building our own character, our society and our nation. In this way, gradually cultivating a connection with the Supreme Reality (parama-tattva) by engaging in hari-bhajana, the living being can make progress on the path of sādhana and gradually attain kṛṣṇa-prema, the topmost goal of human life.