What is Real Independence?

What is Real Independence? 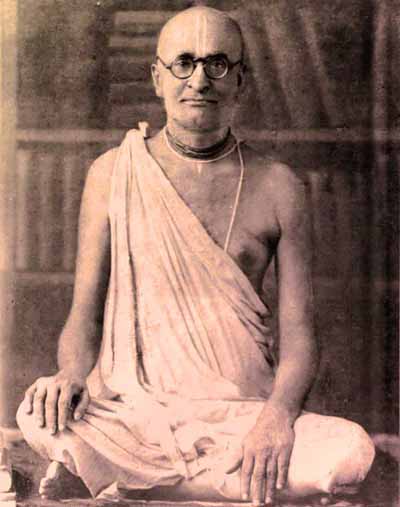 Question 1: Is it possible to perform hari-bhajana without attaining guru-niṣṭha?

Answer: One cannot perform kṛṣṇa-bhajana without becoming guru-devatātmā. You must realize that śrī guru is no ordinary soul; he is īśvara, the supreme authority. As such he has been addressed as devatā, the Lord, and as ātmā, as dear as one’s self, that is, as someone deeply deserving of our love. Only those who consider śrī guru to be īśvara and more dear than their own soul are to be known by the phrase guru-devatātmā. And only such devoted servants of śrī guru receive his mercy. Śrī gurudeva is Kṛṣṇa’s most intimate companion and Kṛṣṇa is more dear to śrī guru than his own vital breath. Therefore, since śrī guru is always pleased with a devotee who has guru-niṣṭha, Śrī Kṛṣṇa is also naturally pleased with such a devotee, who is guru-devatātmā.

Now, observe how the three – Hari, Guru and Vaiṣṇava – are related. Śrī guru is situated between Bhagavān and the Vaiṣṇavas, embracing them both. By firmly embracing śrī guru you shall become the recipient of the mercy of Bhagavān and all the Vaiṣṇavas. There is no other way. If śrī guru is pleased, Śrī Hari and the Vaiṣṇavas will remain pleased. But if you are not able to become guru-devatātmā, if you are not able to make śrī guru your life and soul, then everything will spoil. You will be able to receive neither Bhagavān’s mercy nor the bhaktas’, and as a result you will be deprived of your service to Bhagavān.

[A devotee expressed the following:] Prabhu, you have mercifully described the importance of guru and the need to become guru-devatātmā, but it is our misfortune that we are not able to embrace your instructions.

[Śrīla Prabhupada was notably sad when he replied:] No. It is my misfortune. I have explained so many things, but how many people have actually heard me?

Question 2: How does a devotee pray?

Answer: A devotee prays, “O Śrī Rādhā-ramaṇa, please save me so that I never return to my material affairs and thus destroy myself!” Those devotees who have accepted household life pray, “O Lord, please do not let me become engrossed in household life. Make my desires to enjoy this mundane world vanish and make me forever attentive to serving You. Please save me!”

Question 3: What is the path to our eternal welfare?

No matter how many difficulties we must face, we pray that we may always be able to follow in the footsteps of the devotees of Bhagavān. When we realize our own ineptitude, humility (dainya) arises. That humility is the root of accepting guidance from Bhagavān’s devotees. Only when I truly admit my own incompetence shall I become capable of perceiving the beauty and the glories of the lotus feet of Bhagavān’s devotees. In ordinary society, the most prominent topic of discussion is how to gratify one’s senses. As long as we regard the path of mundane satisfaction as a religious path, there shall be no scope for us to adhere to the path of true religion. In fact, only service rendered to the devotees bestows the highest auspiciousness.

Question 4: Must the mood of independence be abandoned?

Answer: Definitely! He who maintains a mood of independence remains proud, and he who places himself under the guidance of the devotees remains humble. If one becomes proud even after taking shelter of bhakti – that is, if one tries to worship the Supreme Lord alone, showing disregard for worship of the devotees – then, as a result of committing offences at the feet of the devotees, he shall encounter many difficulties. In other words, he will lose interest in serving the Supreme Lord and inevitably embrace his own spiritual ruin.

The purpose of human life is not to accumulate misfortune but to gain supreme welfare. Why does one forget that? Why do I forget that I am most insignificant, most minuscule and completely fallen? Tempted by the allurements of māyā (the Lord’s illusory energy) one dreams of becoming the enjoyer, of becoming the doer, and of becoming the greatest, but all of these dreams are utterly insignificant and in fact thoroughly undesirable. If one desires to relinquish his ambitions of becoming great according to mundane calculations, then one has to associate with the servants of the Great – the humble devotees of the Lord – and imbibe their attitudes and conceptions.

Question 5: What is real independence?

Answer: Endeavouring to become the Lord of this world is abhakti – the antithesis of transcendental devotion. The desire to become the Lord or to become independent, by worldly calculations, is in reality the desire for servitude and dependence. Independence in this world is but a veiled form of subservience. However, desiring to become the loyal subject, or servant, of the Supreme Lord, He who is the embodiment of sat, cit and ānanda, is the factual cause of attaining the most complete independence. As long as the living being holds fast the rope of Bhagavān’s mercy, he should be known by the term sevaka (servant). The inhabitants of this material plane who fancy themselves as self-dependent, and who thus afford themselves a mood of indifference, are truly dependent on others. But those who are subservient to the Supreme Lord are genuinely independent.

When one achieves true independence, he is overwhelmed by the joyful realization, “I am eternally subservient to Śrī Hari!” That entity which is factually the complete whole is known as the Supreme Absolute Being. Subordination, or service, to that Supreme Divinity Śrī Hari, is the only true independence – and it is a delightful independence. Apart from this, all pretentious claims to independence by those who have adopted the mood of being the doer or the masters of this world are the cause of extreme distress. Such false independence is nothing but subservience and slavery to māyā.

Rays of The Harmonist On-line, Year 3, Issue 1 “ What is Real Independence?” by Śrīla Bhaktisiddhānta Sarasvatī Ṭhākura Prabhupāda , is licensed under a Creative Commons Attribution-Share Alike 3.0 Unported License to ensure that it is always freely available. You may redistribute this article if you include this license and attribute it to Rays of The Harmonist. Please ask for permission before using the Rays of The Harmonist banner-logo.